The interesting thing about geopolitics is not so much how geography dictates the imperatives of the nation state but how those imperatives have led to the relationships with neighbours and even far away nations that may impact their interest in some way. I also find it interesting how the pursuit of the interests of a nation may look to their people to be shallow or callous, even when they are absolutely necessary.

Governments come in many forms but essentially they are formed to create a centralized way to steer a society in a chosen direction while maintaining order. Part of a government’s mandate is to keep its people safe and this is done by developing a judicial system, creating laws, and forming an army. In most modern nations the army is beholden to the people and has some separation from the government.  That said, to the army, geography means everything. If the government and the people want to survive, they must listen to the army. Every army wants to be able to effectively defend its position. If the geography aids in this then great, we have a good start. A castle on the top of a mountain surrounded by a broad plateau of open plains creates a very defensible position. The problems start if the position isn’t defensible to begin with. As a government with an army it may be necessary to expand territory to include some defensible positions or at least some distance from presumed enemies. This is a great idea but the governments of those adjacent territories may have an opinion about this. That is one of the ways wars start. Russia historically has been a country that likes to have buffer zones around its poorly defensible borders and this was how the Union of Soviet Socialist Republics—USSR–was formed.

There are also other reasons to go to war, such as economic reasons, and these types of wars are often started because a rising power is seen as a threat to an existing power and then of course one thing leads to another. England, France, Spain, all have had their wars that have started this way. Of course there are an infinite number of ways wars are started, but how they start and what they are actually being fought over may be two entirely different things. 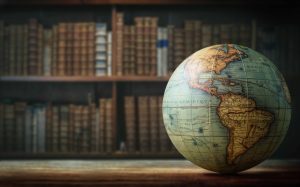 History is not easily forgotten and hatreds or love affairs between nations can live for generations as part of a cultural heritage. Even in times of peace those past memories rarely dissipate and this is one of the reasons the European Union is likely never to be what some visionaries have hoped for. The Greeks will never trust the Germans, the French will never entirely trust the Britons, and the Dutch will never forget the Canadians, and it goes on and on.

The one thing that never changes in a nation state because of history are the interests of that state due to its geography. Its history is born from its location and that history has dictated how it has treated or been treated by other nation states for hundreds and sometimes thousands of years. History creates the culture and each new event adds to that culture.

Living on the North American continent means Canadians have been sheltered from war for generations. Our ancestors, especially if recently immigrated, may have strong opinions.  However, after a generation or two we often develop a tempered viewpoint. North Americans have become more moderate and tolerant. The threat of an invasion is as far away in our minds as the distance from a potential invader. As Canadians sitting next door to a superpower–the only world superpower–the threat of an invader is all but non-existent. Imagine how an immigrant from a war torn country must feel when they arrive in Canada after struggling for what could have been their entire life under oppression and fear of death, or worse. Other than our own oppression of the native peoples of North America, who were mostly annihilated by disease, the average Canadian has no experience and little history of what that might be like.

Sitting high atop the mountain we call North America, surrounded by the vastness of the Pacific and Atlantic oceans, Canadians may have become a little complacent.  But our neighbour, the superpower to the south, has broad interests that keeps its government keen with eyes wide open. Seems like a good position to be in.  As much as I would love to think that all humanity is working towards a peaceful, harmonious, healthy and joyous earth, I feel reality is something different. 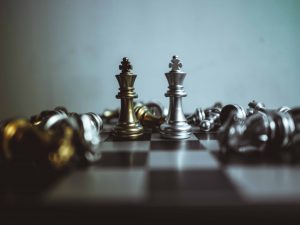 For several US presidential administrations now, there have been threats of reprisals against China for its abuse of internationally accepted trade practices. The Trump administration, for whatever reason, has finally decided to jump into this quagmire and put a halt to it.  No more threats. And now that it’s been started I doubt it will ever end.

China is determined to end its “Century of Shame” as they call it and has vowed to become a world power by taking control over the South China Sea and create an Asian Empire. China’s growth has been unprecedented but to accomplish it they have had to take a lot of shortcuts. The first act was to employ a leader who has the skill and power along with the conscience to do what has to be done. Xi Jinping seems to fit that list of attributes and he has made no mistake in forcing loyalty by invoking over a million arrests of high-level officials since his appointment. The party line has to be followed and no alternative will be allowed under threat of failure. This is not something to be ignored.

To achieve success the Chinese knew early on that modernization had to be done at all costs, and they have accomplished this at lightning speed. Urbanization was a first step to fill the jobs needed and to build the infrastructure for today and into the future.  So cities were built–hundreds of cities. When those empty cities were needed to support industries that were created to feed the tsunami of growth, they were then populated and the new industries suddenly had workers. This migration from the rural communities to the cities was all forced. As farmland was used for industry or flooded by dams the original inhabitants were moved to the new cities to provide labour. Wealthier nations, seeing an advantage, moved their manufacturing to China and used all of this newly acquired and cheap labour.  This in turn helped China to continue urbanizing.

It soon became apparent that to become a world-class economy the Chinese would have to move their economy away from being a sole exporter of goods to a consumer of its own goods. To support this change China needed to educate its people and build a nation that could develop and expand its own technologies. This is a long road for most developing nations but Chinese ambitions are on the clock so they came up with a unique idea. If a foreign company was going to use cheap Chinese labour it would cost and this cost was their technology. This acquisition of proprietary information has boosted the timeline for China’s evolution of technological growth enormously and it is this “technology theft” that the US has had a really big problem with.

For the last couple of decades the world has been watching China with awe and wonder. It has turned itself from a Third World economy into the world’s second largest economy in just a few short decades. As China grew we all became richer. Goods were cheaper from China. Chinese money invested in international property drove up values in many areas of the world. Even the Chinese people, in our eyes, were becoming richer with millions of people leaving poverty behind. Many countries in the world have become dependent on cheap Chinese goods and on sending energy and raw goods back to China, which supports their own economies. It’s all a win/win. The world was made smaller.  It was working as it should and we were all getting fatter because of it. So what is the US thinking?

Pushback in the Wind 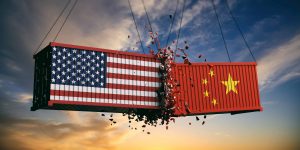 All is fine until it isn’t. We are all getting fatter off a suppressive dictatorial government that has a goal of dominating the Asian continent and the oceans surrounding them using whatever methods they can get away with. China is now a power to be reckoned with and even though some of us may look at the US as a bully using less than ideal methods to get what it wants, China is a dictatorship using oppression with disregard for international laws and morality to attain its goal of Asian domination. China will become a major economic and military power. It may become the world’s second superpower, it may even one day control the Asian nations and the oceans surrounding them. Who knows? For as many reasons as there are against this prediction there are as many supporting it. The one thing for sure is that as China’s power grows it will threated the interests of the only current superpower we have and this is going to create pushback.

North America has a new NAFTA, dubbed the USMCA, and in this new agreement there is a clause that puts some pressure on Canada and Mexico to only do business with market economies. China is not considered one of these at the moment. There is also some auto restrictions that put the import of Chinese autos in doubt. The US has reduced taxes to corporations hoping to motivate them to move their manufacturing and technologies back to America. These are all long-term plans that gives the impression that the US is setting up to dig in for a long fight against China. The US has broad interests.  They have developed a large and technologically advanced military including the world’s greatest navy to protect those interests. China’s ambitions look to be an impediment to those interests. Dealing with China’s ambitions has been on the US agenda for some time. Trump has no qualms about confronting this, unlike his hard-talking but soft on action predecessors, and if timing is anything it’s everything.

Expect this to be the beginning of a long and someday potentially hazardous confrontation. Also expect other nations to eventually side with the US as their interests begin to align. You don’t really think Mexico and Canada missed the anti-China clauses in the USMCA? What is at risk is the benefit of doing business with the second largest and growing economy, which comes with all the economic, humanitarian and environmental backlash that goes with it. To allow China to go on unchecked, hoping that they will become a nice, amicable part of the world order is to overlook their stated goals, which are being pursued by a dictatorial and oppressive regime along with their humanitarian and environmental record and their non-conformity to international rules and law.

Rob, Heather and I will be heading to Houston for the ASNT Annual Conference being held on October 28th to 31st.  That conference should bring out just about everyone.  It will be fun to see all our NDT friends in one place. With any luck we will find the newest, greatest product that will make your lives just a little bit easier. We did last year with the handheld carbon analysers from SciAps. It is truly one of those technologies that changes the way we do business. Going from the current two-man operation of lugging a cart-load of equipment around to a hand-held carbon analyzer is nothing but game changing.

If you make it to Houston hopefully we will see you there, and be able to wish you a happy Halloween.

In the meantime remember…for the unknown there’s NDT, for NDT there’s IR.